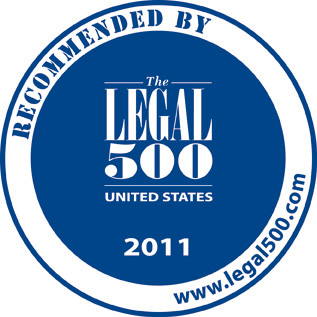 Bernstein Liebhard LLP is honored to be listed for the fourth consecutive year in the 2011 edition of The Legal 500, a guide which provides the most comprehensive coverage on law firms in the United States. The publication ranked the firm as one of the top seven plaintiffs’ firms that litigate securities class actions and mass torts. According to its editor, The Legal 500 Series is the world’s largest legal referral guide; details about the selection process can be found here.

In particular, The Legal 500 emphasized the success of Bernstein Liebhard LLP’s securities group: “The firm’s demonstrable expertise in this field means that it is regularly appointed to significant roles in complex or bellwether cases,” and cited the firm’s role as lead counsel in the securities action in In re Mutual Funds Litigation, which received final approval in October 2010. The publication highlighted other high-profile settlements obtained by the firm, including the $400 million settlement obtained by the firm in In re Marsh McClennan Securities Litigation, and the $586 million settlement obtained by the Firm in In re Public Offerings Securities Litigation. Additionally, The Legal 500 recognized several of the firm’s partners as leaders in their fields: “The highly respected Stanley Bernstein is recommended along with Jeffrey Haber, Rebecca Katz and U Seth Ottensoser.”  The Legal 500 also highlighted the firm’s Supreme Court and appellate practice group that underpins the class action practice, and includes four former clerks of the United States Court of Appeals for the Second Circuit, and the United States District Courts for the Southern District of New York, the District of New Jersey, and the Eastern District of Pennsylvania.